Having our origins in the government and being spun-off to guard the thousands of years old tradition of Korean ginseng, Korea Ginseng Corp places our highest priority on safety and setting the standards for superior quality control. Each root is cared for and monitored for 6 years of its cultivation and growth in pre-approved and carefully graded farms. Our farms operate on contract after extensive testing of the soil, ensuring that fresh land is used under the most natural conditions.

Upon harvest, Korean ginseng is sorted into grades through a three stage process: appearance screening, tissue inspection, and weight.
In appearance screening, trimmed Korean ginseng is sorted into Heaven, Earth and Good grades according to standards such as color, cracking and form. In tissue inspection, the ginseng roots are tested rigorously and passed through intense light in order to inspect even the internal construction of the root. Finally, the roots are sorted according to weight for a total of 9 grades possible. Only the world's best ginseng roots will find their way into KGC products.

The actual physical processing of Korean ginseng roots and the production of final products occurs in our state-of-the-art facilities, including the world's largest ginseng factory. Combining traditional methods with fully modernized good manufacturing practices, we operate the under strict quality control systems necessary to produce the world's best Korean red ginseng. Ginseng that is not used for our processed products will be compressed, dried and placed in a wooden box carefully lined with Hanji (a delicate, traditional Korean paper wrapping). The wooden box itself is wrapped in paper, packed in a plastic film, vacuum-sealed and preserved naturally in a traditional tin canister, which is then sold in the Asian markets as a specialty artisan food product. Due to the high reputation of KGC, these canisters can fetch prices in the hundreds or even thousands of dollars, depending on the roots internal qualities as labeled, and without disturbance and stored in a cool place, they remain fresh and perfectly safe to eat for 10 years or more, due to KGC's best practices in quality control.

1. Selection and management of a ginseng cultivation site

An ideal topography of a ginseng cultivation site is a wide-open area, facing north or northeast, without any objects blocking the wind, with good drainage. Its soil should have a clear division between the topsoil and the deep soil layers, and the richer the humus, the better it is for ginseng growing.

2. Picking the seeds and opening their skin

Pick seeds from a four-year-old ginseng in mid-July, when its fruits have a strong, red color. Sow the seeds after their strong and hard skin have opened.

Sow the seeds between late October and early November.

Around middle to late April, two years after sowing, dig ginseng sprouts from the seedbed and transplant them to the main field.

Three small leaves are formed in a stipe, and the main root and lateral root are formed.

Five small leaves are formed in each of two stipes. The lateral root is newly formed in the original main root after it is naturalized into ginseng plant on field.

Five small leaves are formed in three stipes. The flower begins to blossom, the root becomes large, and the root shape is fixed.

Five small leaves are formed in four stipes, and the root becomes larger.

Five small leaves are formed in five stipes, and the root becomes larger.

Five small leaves are formed in six stipes, and the whole human-like figure of ginseng is formed. Ginseng's phytochemicals, which are healthful to the human body, are maximized in the six-year-old root; thus, the highest-grade red ginseng is manufactured with ginseng having been harvested in its sixth year of growth.

The harvest of ginseng is performed in the fall, around September or October, when its roots are four to six years old. An ideal harvest is made in the sixth year.

Red ginseng is steam-cured and dried to ensure storage for a long-term. The steaming process increases the number of healthy active components by stimulating biochemical changes of in the root's composition.

Fresh ginseng is soaked in hot water and then dried

2 weeks without sun-drying (depending on storage conditions) 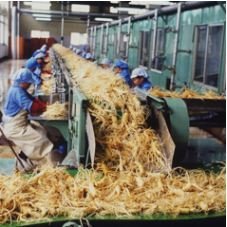 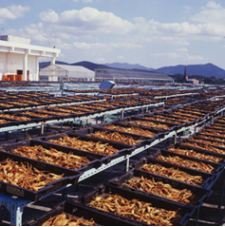 3. Steamed ginseng is dried naturally in the sun. 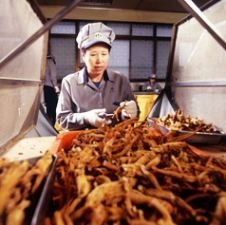 4. The roots are trimmed and cut so only the plump bodies remain. 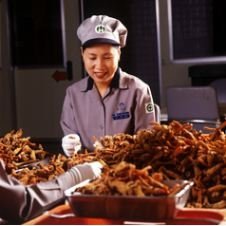 Each root is inspected for quality. 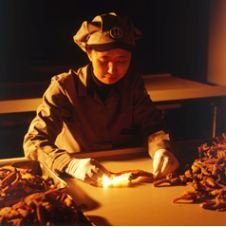 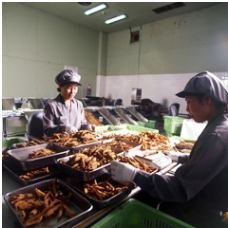 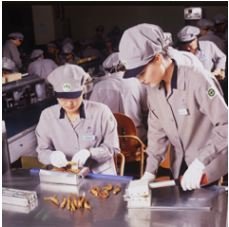